Skip to Main Content
It looks like you're using Internet Explorer 11 or older. This website works best with modern browsers such as the latest versions of Chrome, Firefox, Safari, and Edge. If you continue with this browser, you may see unexpected results.

Your essay on Hamlet must be at least three pages with a maximum of five pages long. See topics below.

You need one primary source (your book) and three secondary sources.

Follow the MLA Format and attach a Works Cited (see second tab for the MLA 8 Guide).

MyBib.com is a citation manager that provides free citations for MLA, APA, and Chicago style.   Create a new Project, then Add a Citation.  Choose from website, book, journal, video, and more.   If citing a database article, click on More and then Write/Paste.  When you are ready to print your Works Cited or References page, click on Download Bibliography.  Click here for handout. Watch the video! 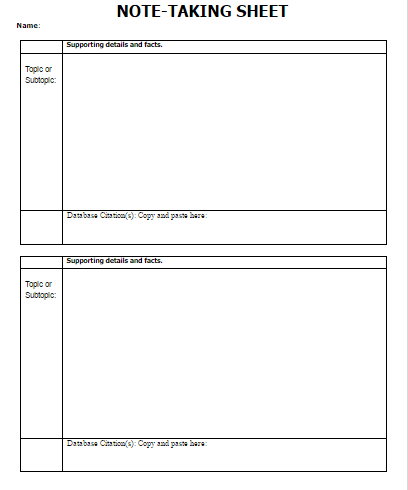 MLA citations are available for every article. Copy and paste into your Note Taking Sheet.

You need to pass in your Note-Taking Sheet with your brochure.

These links are to scholarly database articles.  You may choose one overview article and then one that address your topic below.

For more articles, search Othello and a keyword in any of these databases (Home login and password: montytech1):

Hamlet has been called a "claustrophobic" play because of the ways the different characters spy on one another, but "spying" is only one form of deception in the play. There is also Claudius, the incestuous fratricide(killing one’s brother), playing the part of the good king, and Hamlet himself decides to "put an antic disposition on" (1.5.189). In a way, it is Hamlet's job to see through all of this deception and to discover the truth, although, to discover the truth, Hamlet himself must use deception. What point is Shakespeare trying to make by introducing all of the deception, lying, and false appearances into his play?

Hamlet tells his mother that he "essentially [is] not in madness, / But mad in craft" (3.4.204-205) and claims to "put an antic disposition on" (1.5.189), but does he ever cross the line between sanity and insanity in the play? To complicate matters, the world of Hamlet seems insane: the king is a murderer; the queen lusts after her dead husband's brother; friends spy on friends; and one character really does go insane. Could Hamlet really be sane in an insane world? And what about Hamlet's melancholy? From the beginning of the play, Hamlet is depressed, and he considers suicide several different times. What is the real cause of his melancholy? Does he ever break out of his melancholy?

As Hamlet says, "What a piece of work is a man! How noble in reason, how infinite in faculties, in form and moving how express and admirable, in action how like an angel, in apprehension how like a god!" (2.2.286-289). At the same time, though, we are sometimes ruled by our passions (lust, greed, gluttony, etc.). We are capable of greatness and nobility, but we are also capable of behavior fitting a beast, so Hamlet asks another "pregnant" question (a question loaded with meaning) when he asks Ophelia, "What should such fellows as I do crawling between earth and heaven?" (3.1.128-129). All of the characters in the play are "crawling between earth and heaven," but some are drawn more to earth by their "beastly" behavior. How does the theme of passion and reason apply to some of the main characters? How does the issue of passion and reason help to determine Hamlet's views of some of the other characters and of life in general?

4. Theme of Decay and Corruption

"Something is rotten in the state of Denmark" (1.4.98). In fact, many things are rotten in the state of Denmark, and images of decay, corruption, and disease are common throughout the play. Following the conventions of tragedy, many of the characters become corrupted in some way, and, by the end of the play, all of the corrupt characters must be eliminated so that Denmark can once again be set right. Many characters in Hamlet die. In what ways is each of these characters "corrupt"? What images in the play suggest decay, corruption, or disease?

Hamlet is one of the most complex characters in literature, and Shakespeare created in Hamlet a character that defies easy explanation. What aspects of Hamlet's character are admirable? What are Hamlet's weaknesses or flaws? And what about Hamlet's mental state? Hamlet has been called the most intelligent character in all of literature. Why? And how do his melancholy and feigned (or unfeigned) madness add complexity to his character? Does Hamlet see the world lucidly, or is his perception of the world too clouded by his melancholy? And why does Hamlet take so long to kill Claudius?

6. How Should One Live? What is the Purpose of Life?

In her madness, Ophelia brings up an important theme of the play: "Lord," she says, "we know what we are, but know not what we may be" (4.5.43-44). Both "what we are" and "what we may be" are problems that Hamlet struggles with throughout the play. Should one lead an active life or a passive life? Does God help to direct our actions? Is the world nothing more than a prison? Is there a meaning to life? Are some of Hamlet's views on life too pessimistic, or are his views supported by the world of the play? Is Hamlet an idealistic and therefore disappointed by the realities of life?

One student in a freshman class wrote a 6-page research paper on Juliet. The student was interested in the character, so she did some research, came up with an original thesis, and ended up writing an excellent paper. Another student focused her entire research paper on Tybalt in Romeo and Juliet. Remember, you can write on almost any topic that you find interesting and that you think will help readers better understand the play. If you are not interested in any of the topics above, you might read a few articles on Hamlet and see if any issues that the critics brings up could be developed into a research paper. You should not use someone else's thesis, but writers developing an interpretation often touch upon a variety of ideas that they do not explore in much depth. You could take one of these ideas and develop it into your own paper.